Commercial Photography & Videography - Archvillain Games - Behind the scenes - Part ONE

Behind the scenes of the most fascinating project - PART ONE - The Beach. 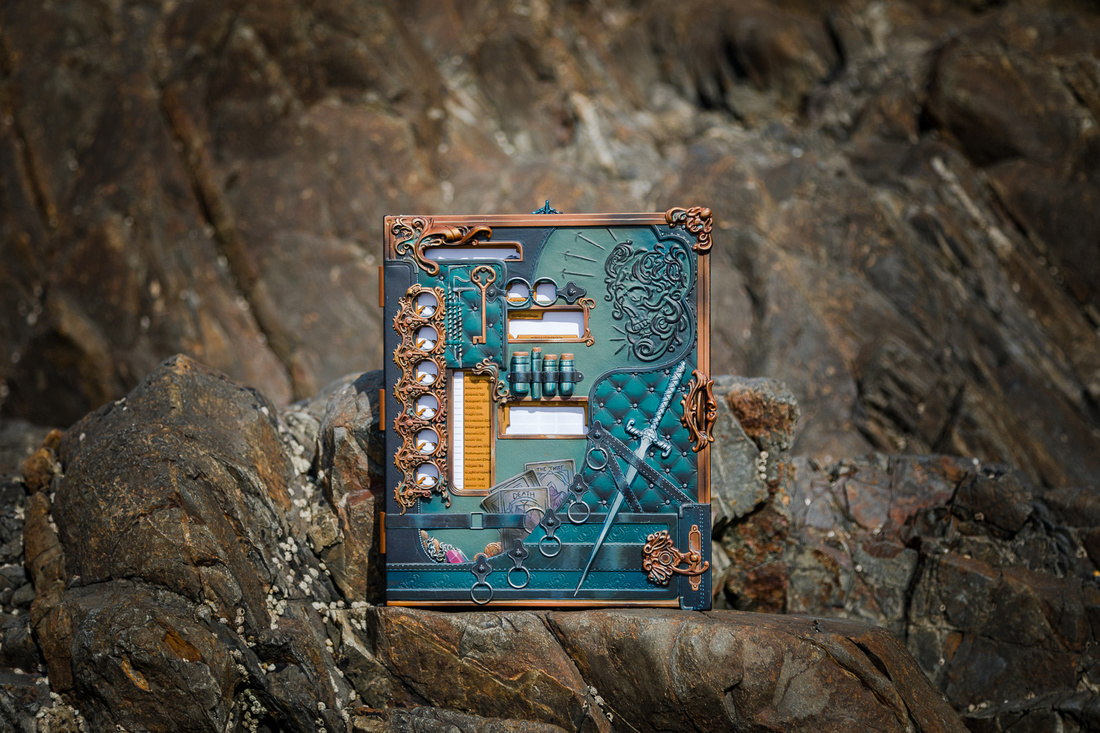 Well, where do I start? What began as a 'standard' photo-shoot request quickly evolved into a much larger and simply fascinating project, that was both challenging and fulfilling at the same time.

I was contacted by Konstantinos Martinos of Archvillain Games about photographing their five prototypes for a crowdfunding investment launch planned for October. They're called 'Gauntlets' and essentially they are accessories developed to enhance the enjoyment of playing 'Dungeons and Dragons'. Now I vaguely remember the game launching when I was a child (I'm showing my age now!) but had no idea that it is enjoying a huge resurgence. It's due to those 'kids' of the 80s now being adults rediscovering the game and taking it to whole new level, with weekend events and even famous fans!

Archvillain Games and Anibas Photography - The Gauntlets have arrived.

Konstantinos and Cameron Rout have together invested an enormous amount of time and passion into their project and built a team of amazing people including the insanely talented India Lee whose illustrations are the basis of the designs of the Gauntlets. When they first arrived here I was simply staggered by the detail and incredible hand painted Gauntlets which in essence hold printed sheets to do with the game play of Dungeons and Dragons so sort of look like a book with an amazing cover.

They were looking for the perfect locations for photography, having visited France in the summer they knew that we're lucky enough to have an abundance of historic monuments that might work, but needed someone who could help them make it happen. They'd come across some of my photos of the Abbaye de Hambye a 12th Century ruin in the Normandy countryside as I'd photographed it as one of my projects commissioned by the County's Tourist board Manche Tourisme. 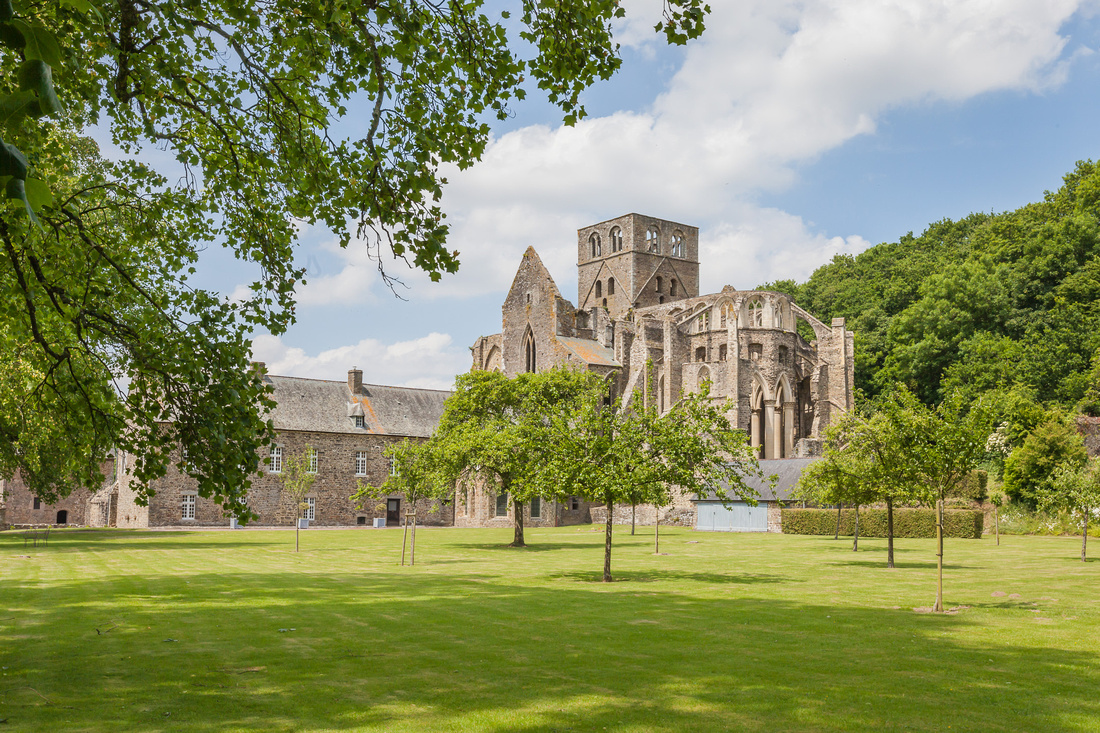 To be honest I didn't think we'd be given permission to carry out a commercial photo-shoot there as it is a classified as a historic monument but I thought I'd ask anyway. In the mean time, expecting a (polite) refusal, we began discussing other potential locations and I mentioned a rocky cliff area right at the end of a beach I know about 40 minutes from my home here in France that has some fantastic angular rocks in really bold colours that I thought would suit the gauntlets very well.

At the same time Konstantinos asked if I knew a videographer who might be able to take some clips at the same time. By this time I was so invested in the project I offered to do it for them, explaining that it was something I'd be looking into doing as my photography equipment has all the HD video capabilities but explaining clearly that I had little experience. 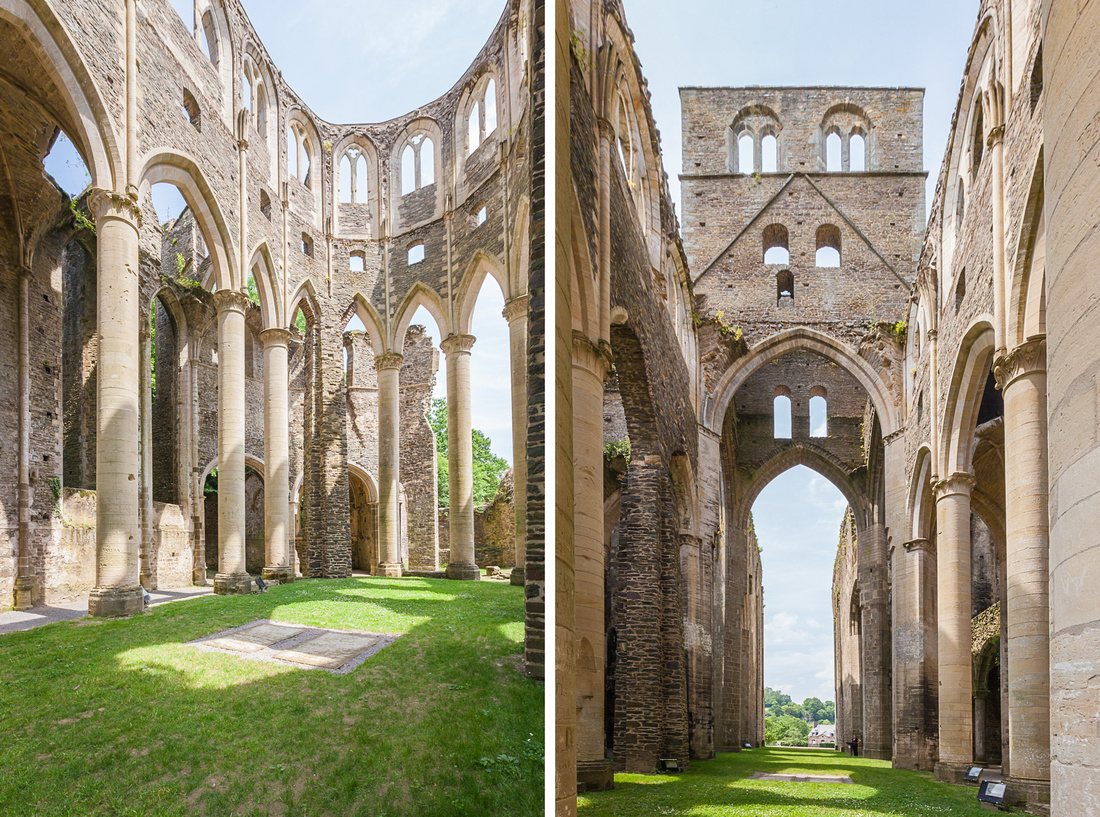 Then to our greatest surprise I was notified that we had authorisation to shoot and film at the Abbey. They really understood the theme and link to medieval times so understood why we felt the abbey ruin would be the perfect location. So, from there, the project grew as by then they'd loved the idea of the beach shoot too and wanted to do both locations and to do both photography and videography.

Here are just a few of the beach photo shoot photos. I made two trips, both having to allow for the tides which cover the entire beach and into the caves where I was shooting : The first at night time to capture the dramatic and 'contrasty' look of adding artificial light and the second trip in the daytime to make use of natural light and other areas and caves. I managed to choose one of the hottest days of the summer and the beach had many holiday makers, enjoying their day but who were very curious as to what I was doing! 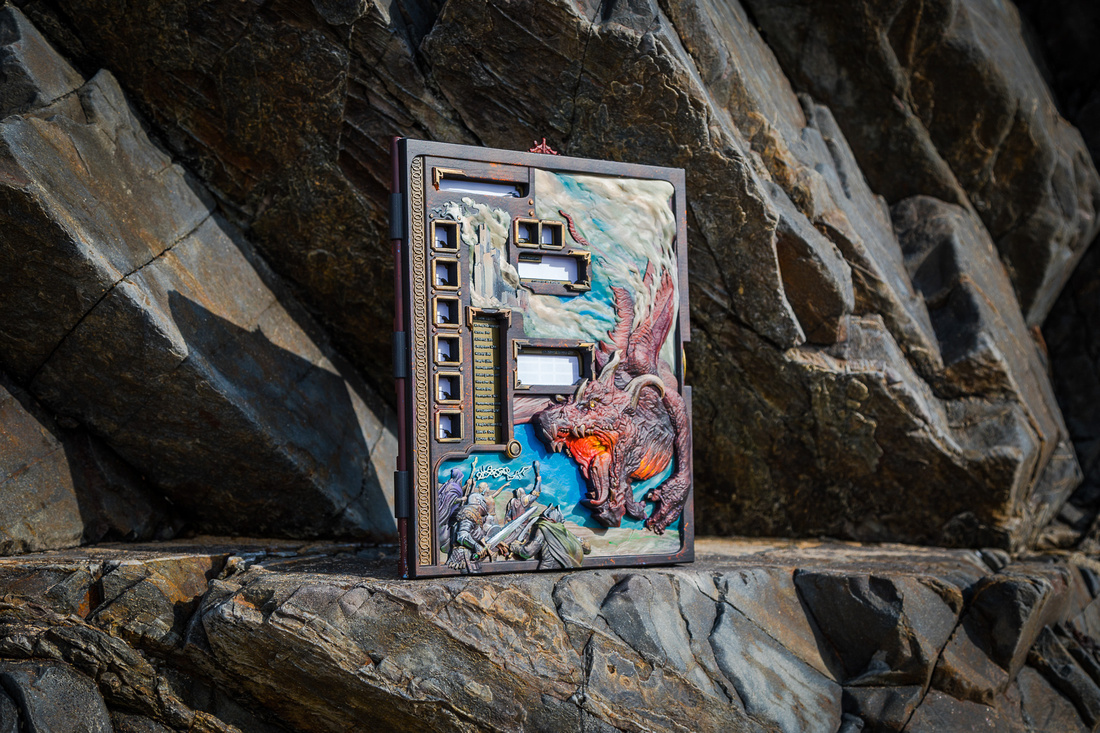 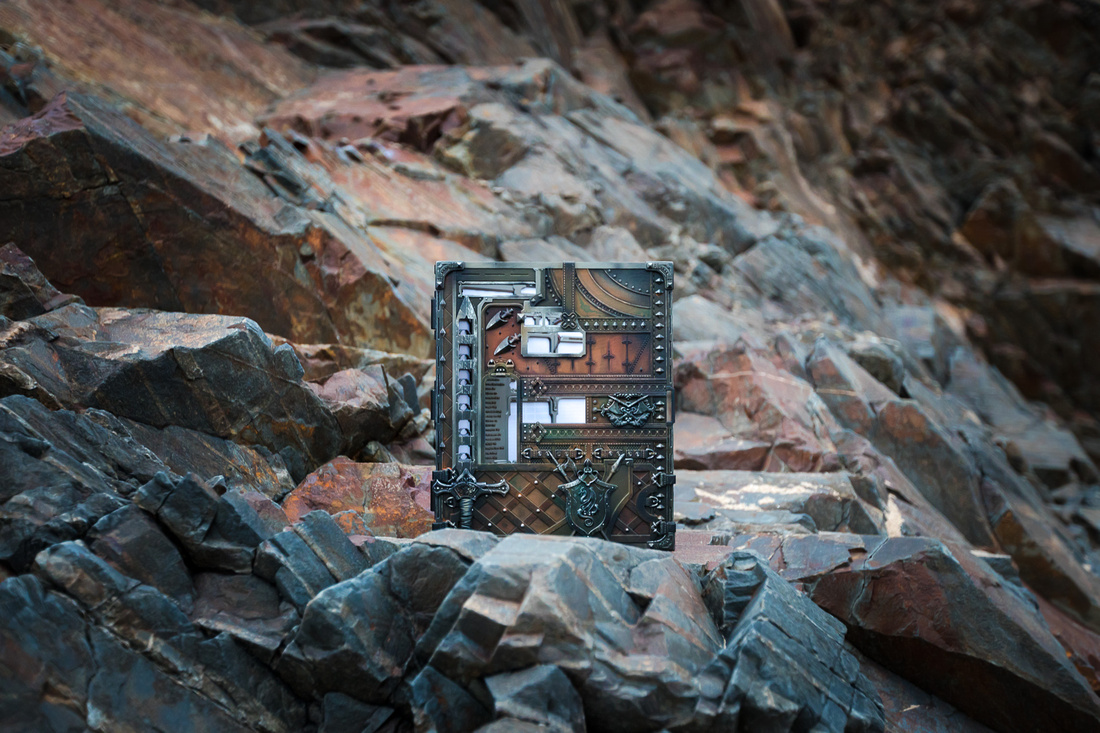 I think the late afternoon sunlight real helps pick out the details in the Gauntlets showing just how three dimensional they are. 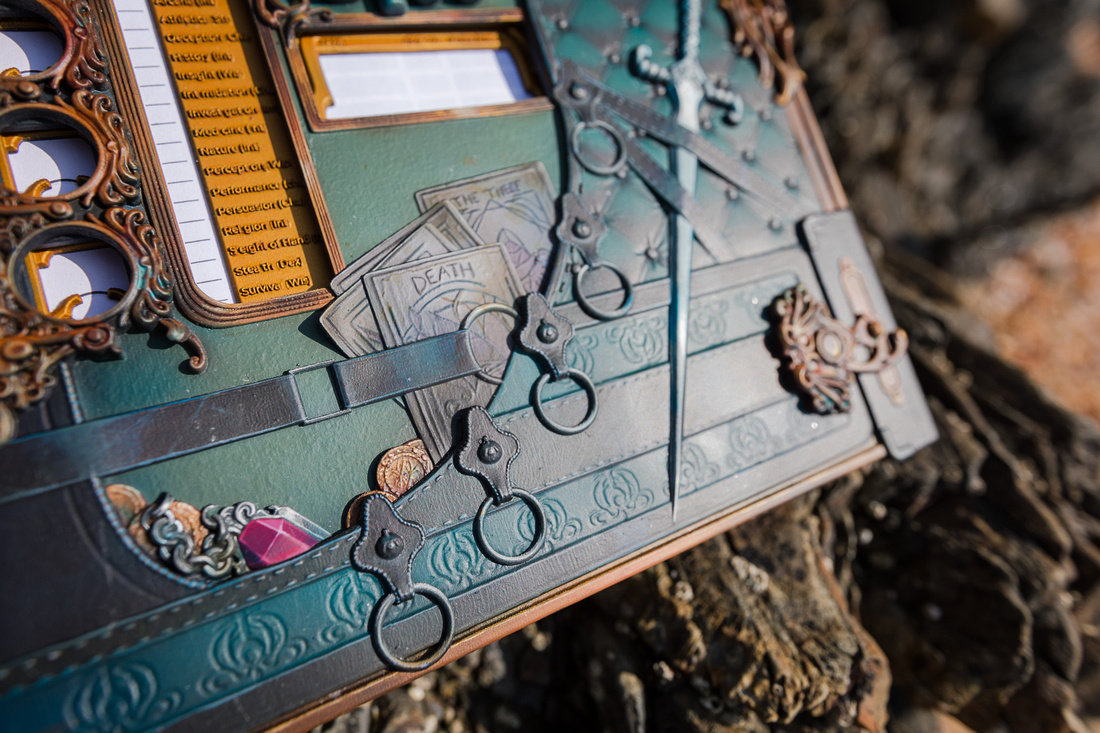 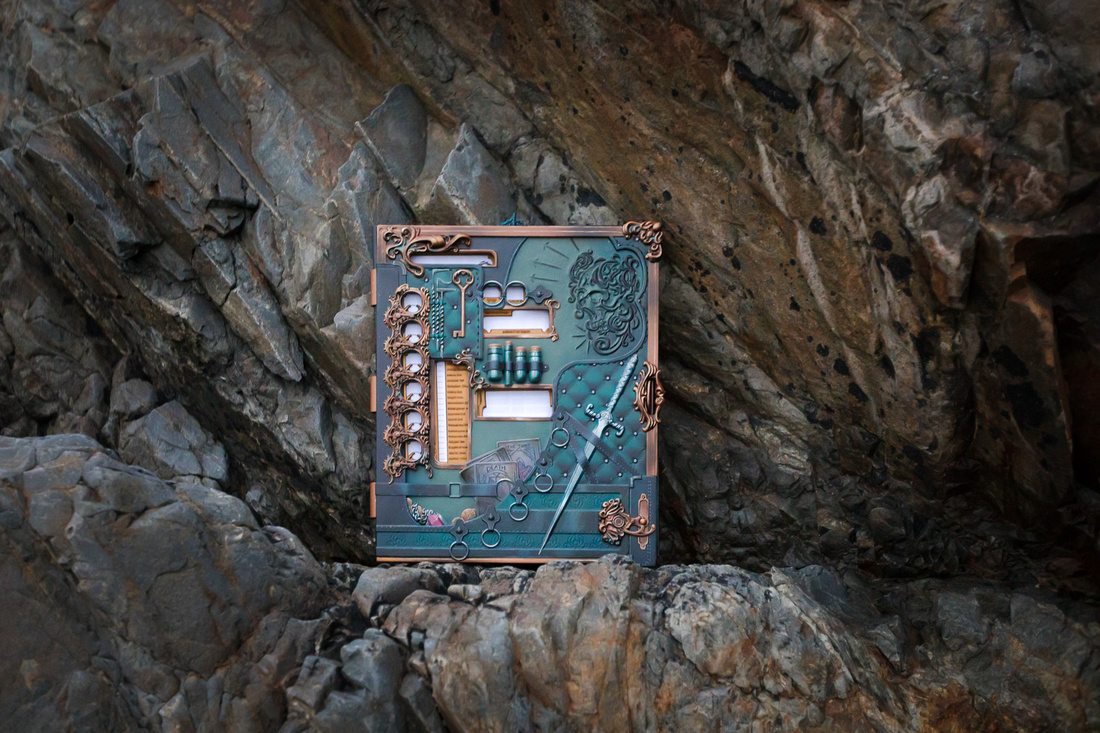 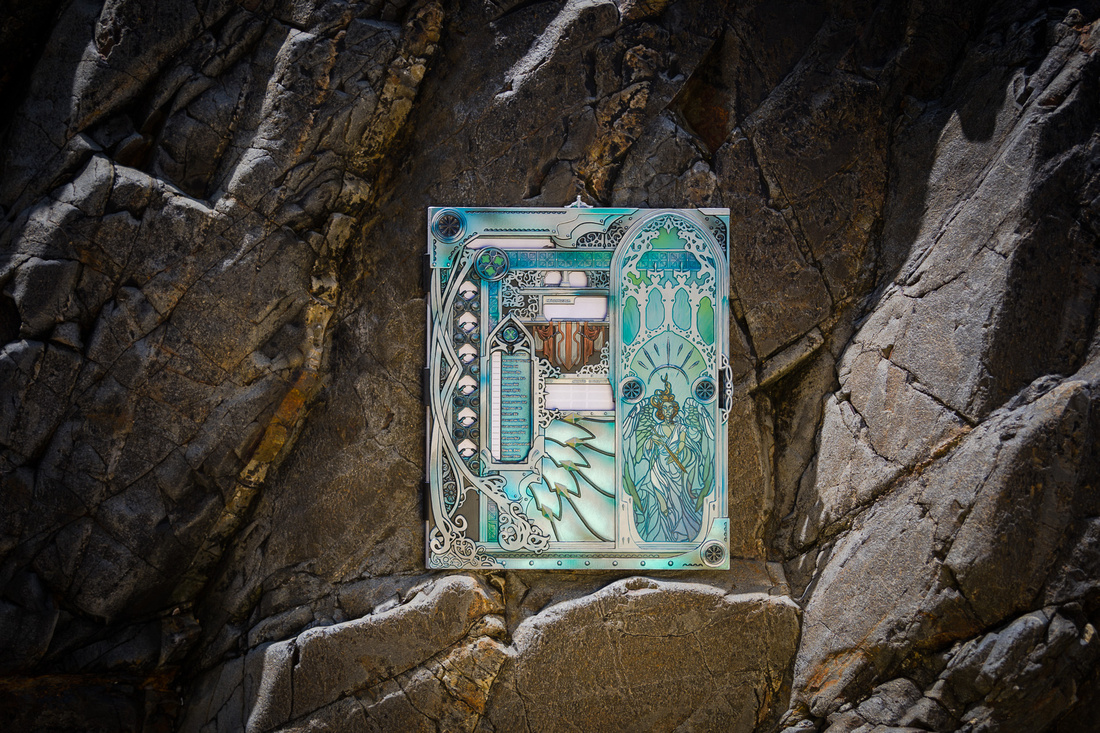 Here's a behind the scenes photo showing the cave with its 'craggy' and slippery rocks that I found for the following photo, that is under the waves of the tide half of the time. Balancing the gauntlets was certainly tricky and time consuming here. 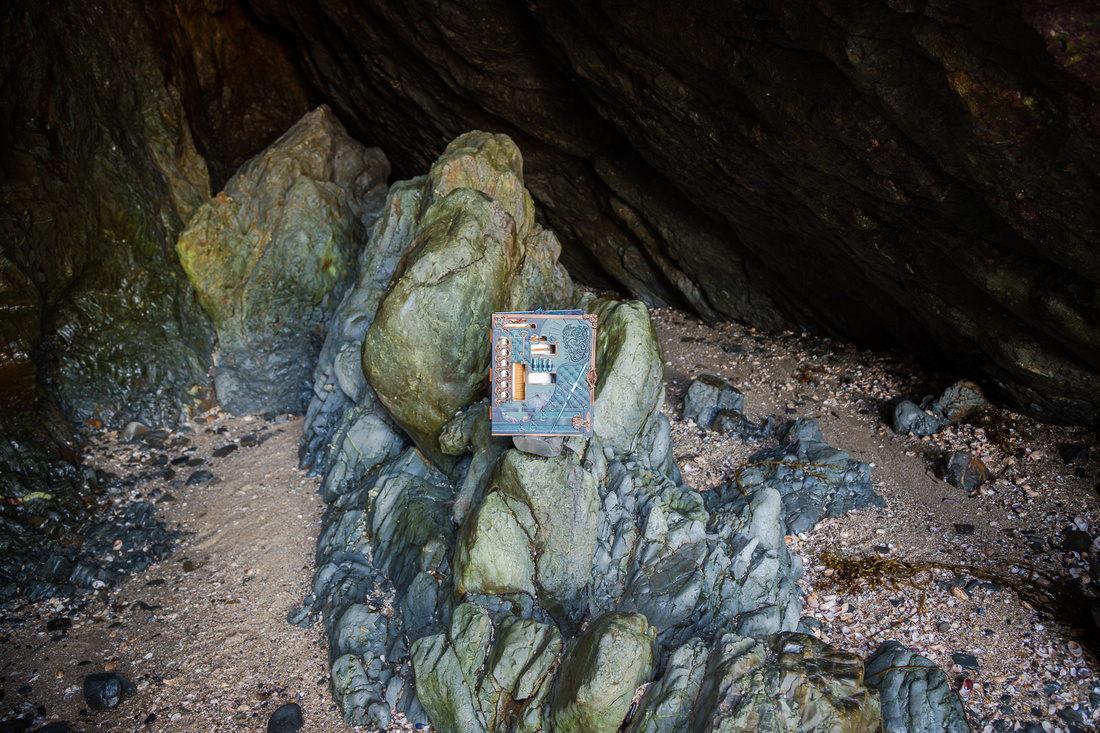 Funny little anecdote : As I left this cave a French Dad and his (probably) four year old son were walking towards the cave. The Dad somewhat sheepishly explained that his little boy was looking for dragons! Wow, what a coincidence considering what I was doing there. So I immediately explained that I hadn't seen any dragons BUT I could show him a dragon. So I grabbed the 'Dragon' Gauntlet and showed him! Both father and son were beaming at seeing it. 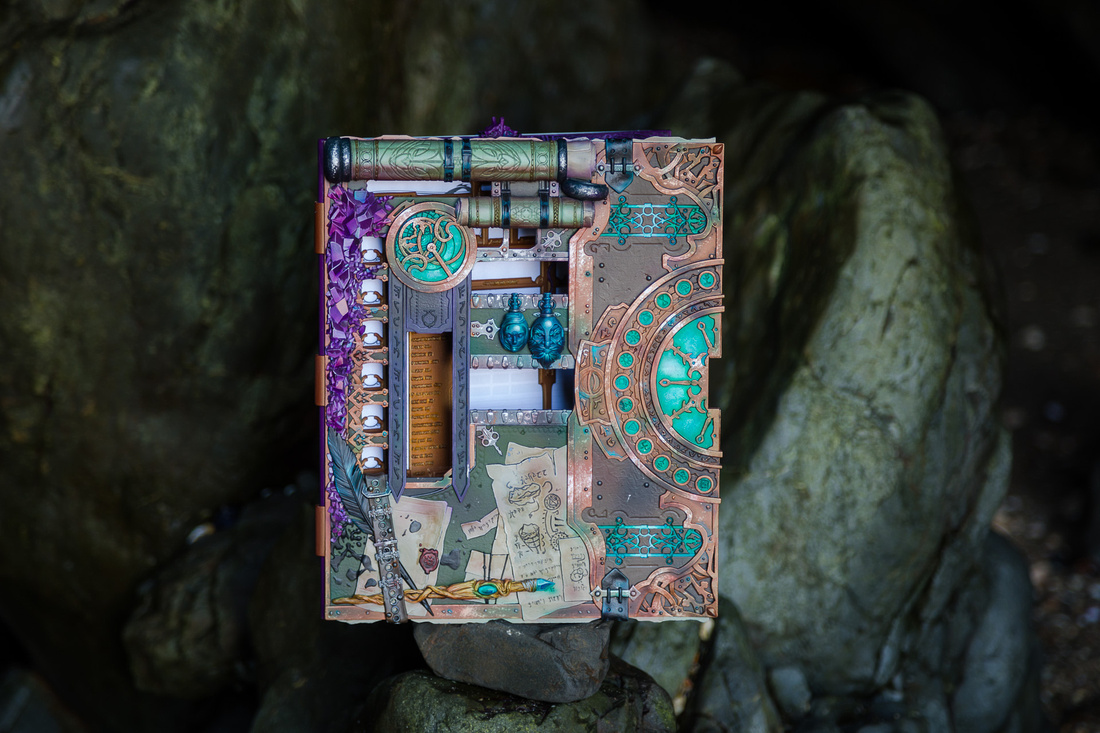 Here I added some artificial light and slid out the tray that holds the character sheets to show how the gauntlets 'work'. 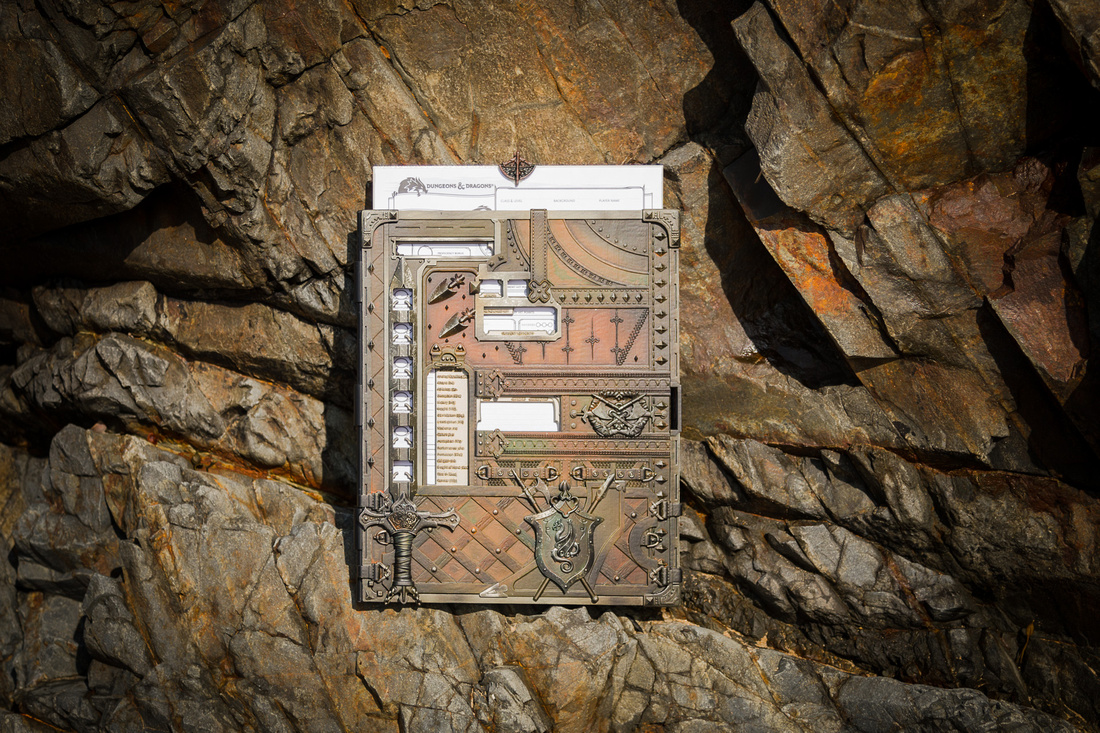 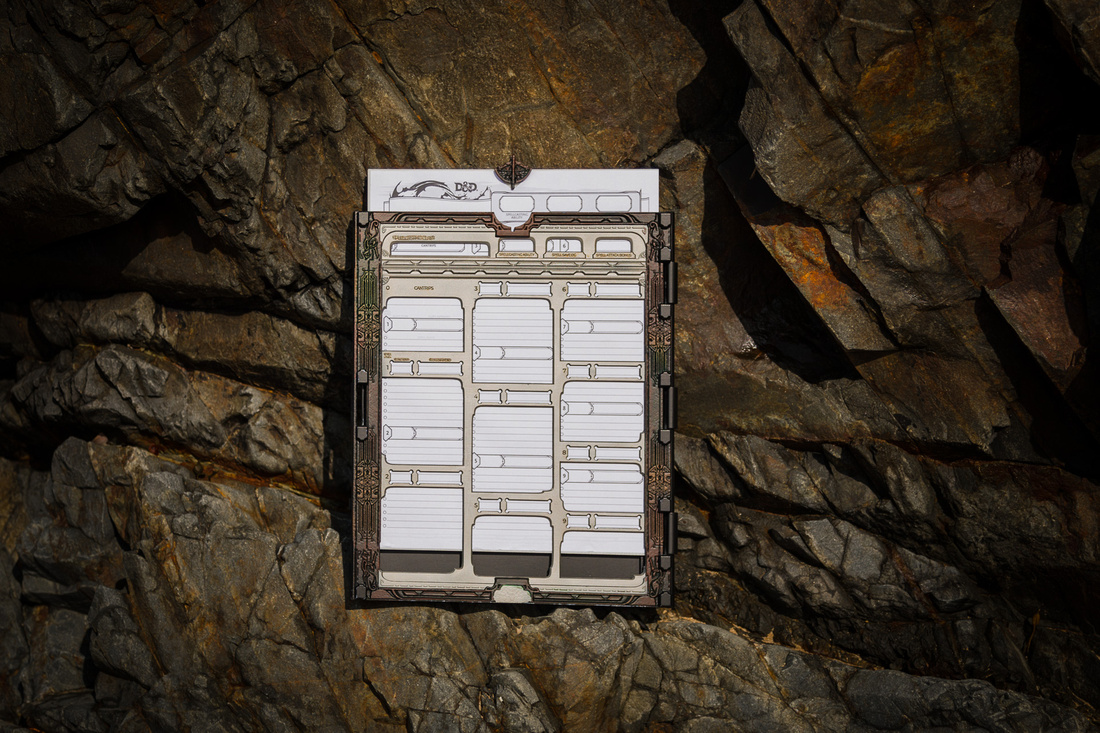 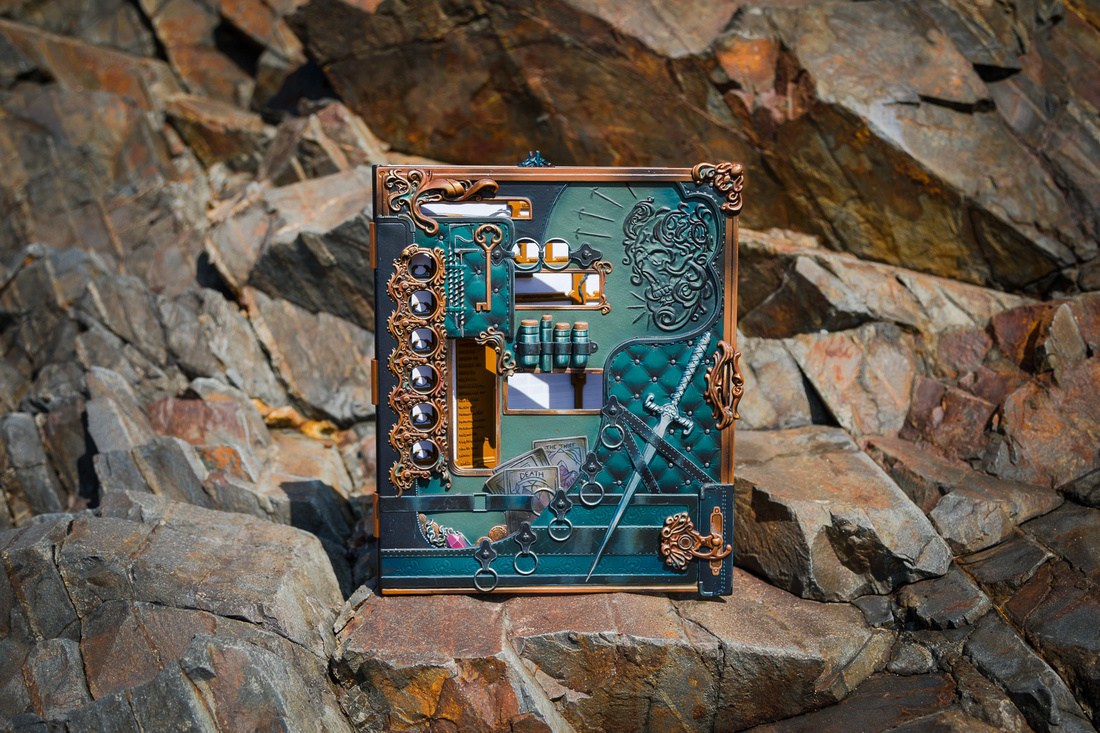 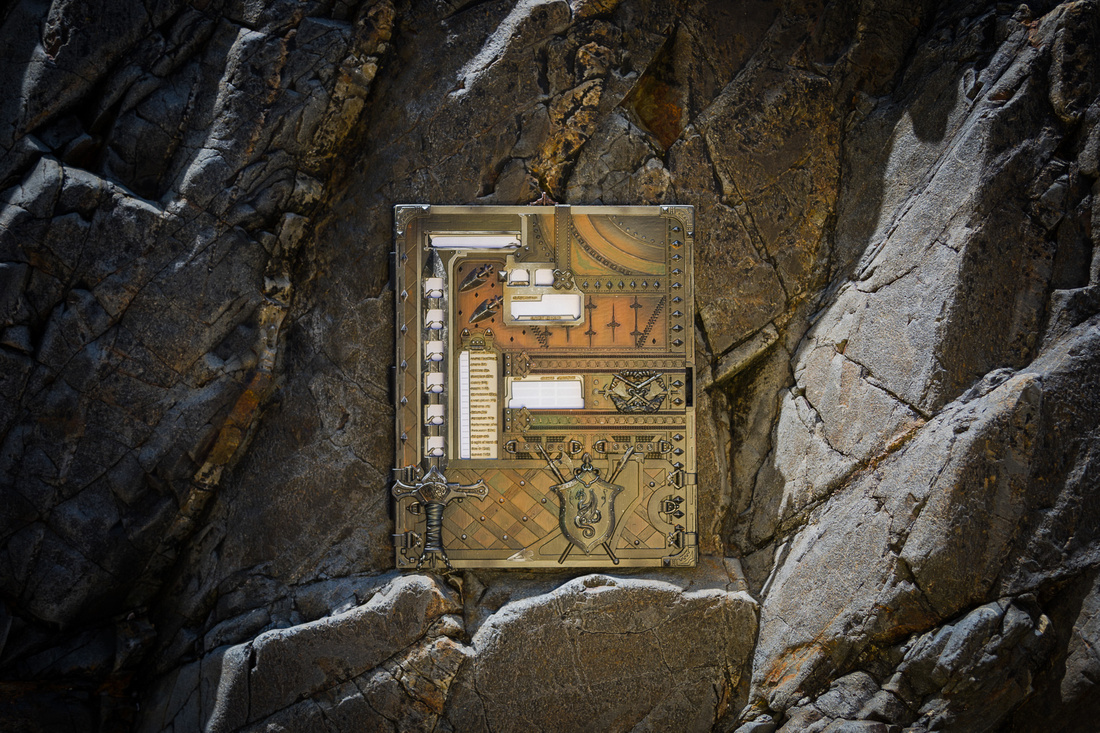 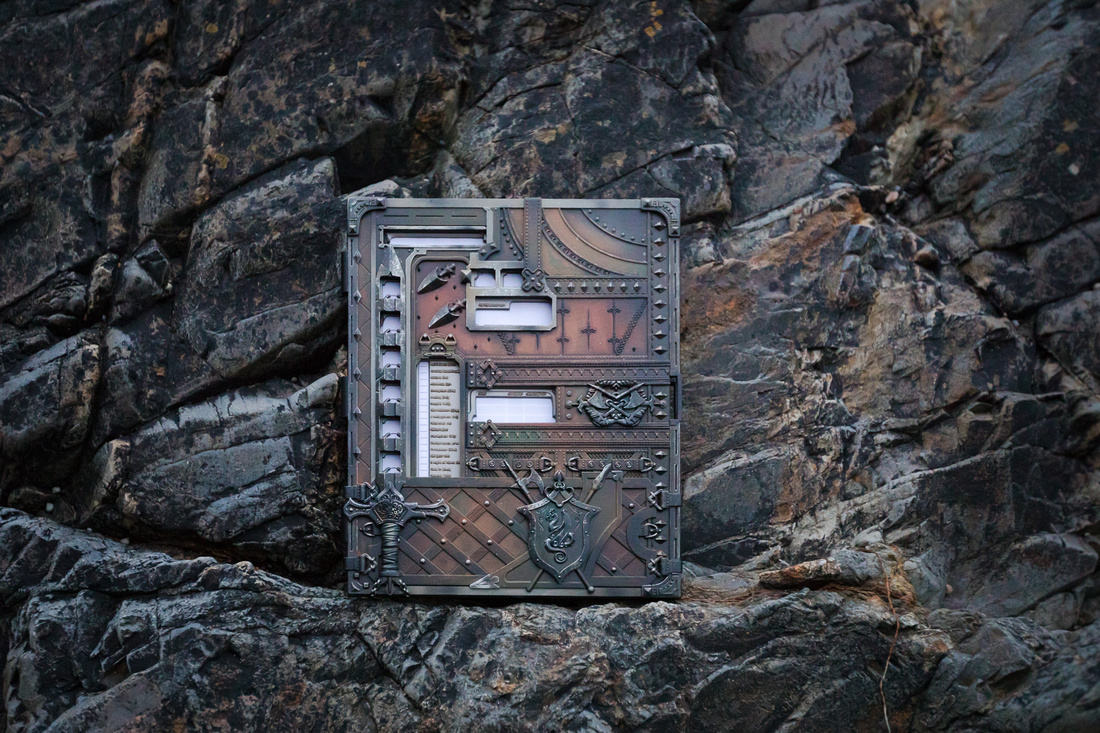 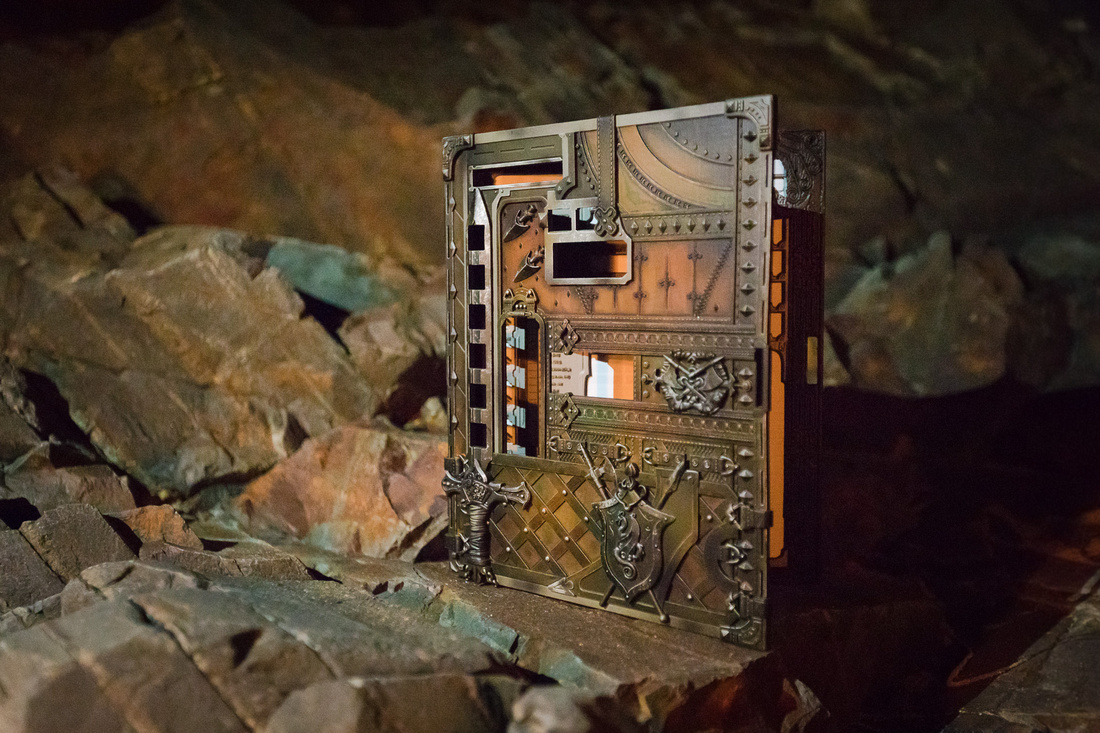 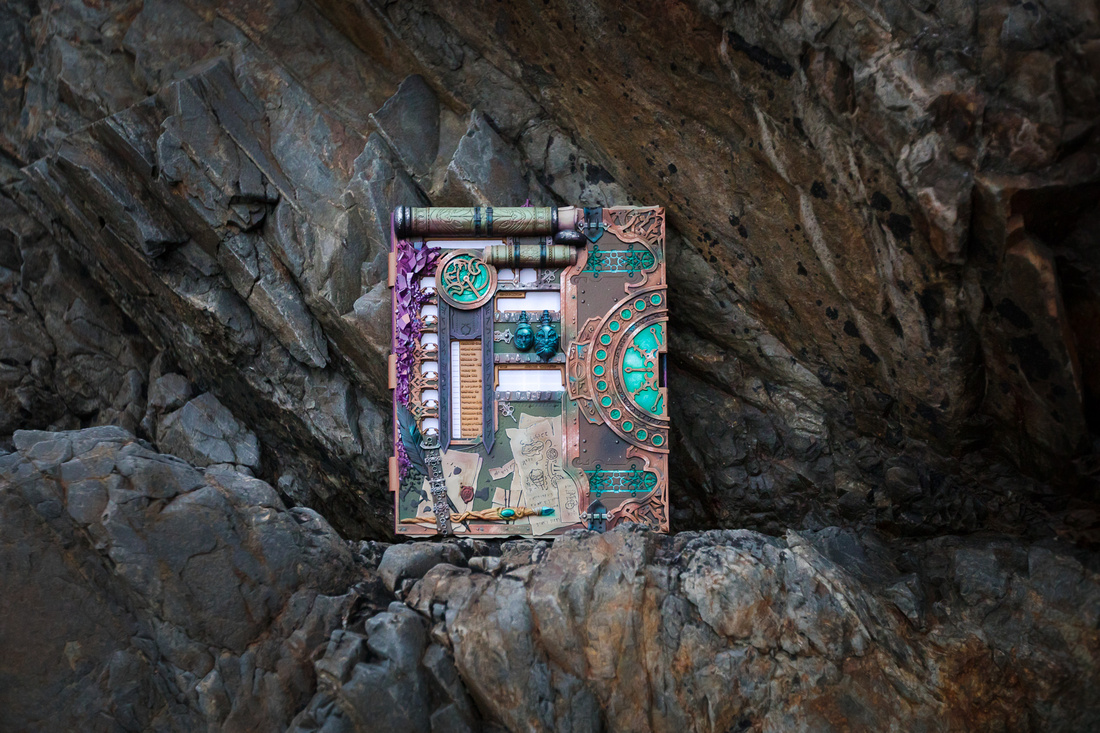 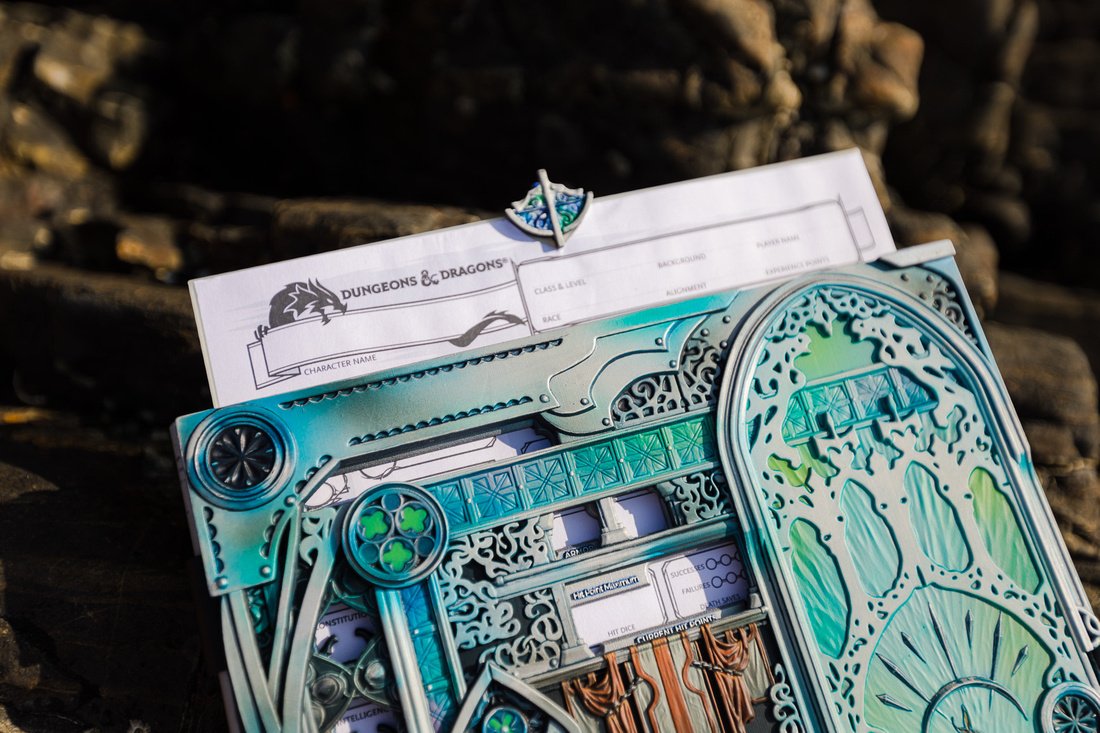 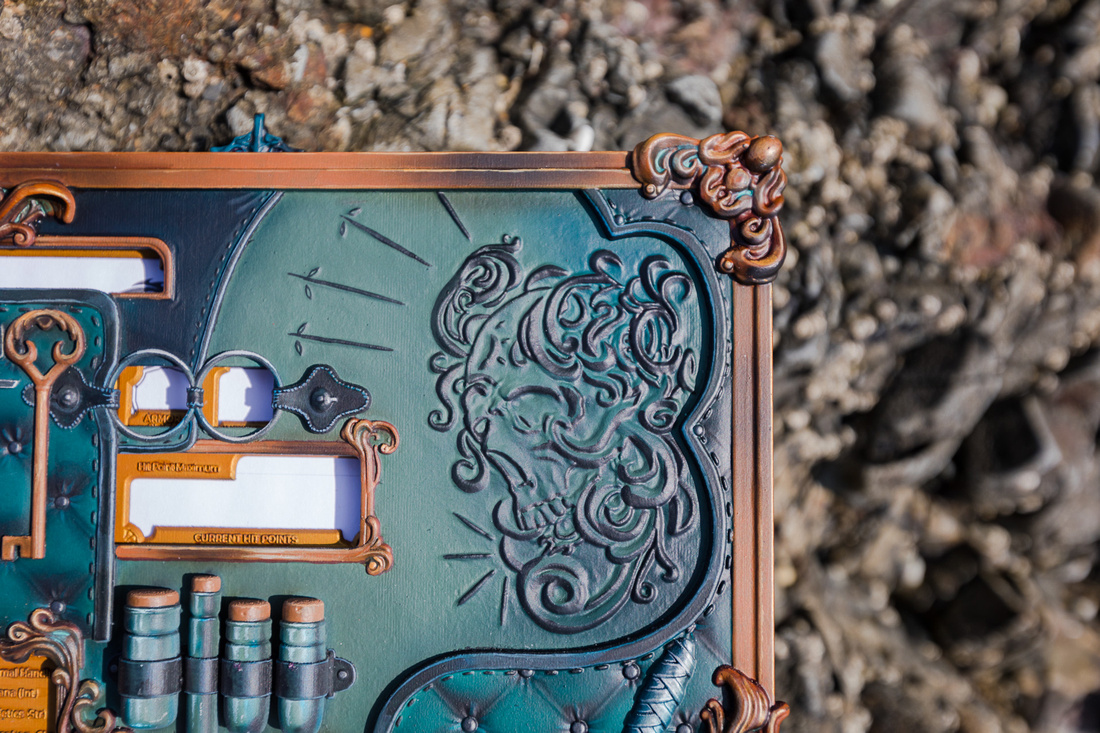 If you're itching to see some video, here's the first teaser video produced from my clips - 40 seconds long. Make sure you turn your sound up!

Michael Rhodes(non-registered)
WOW! The Abbey location was great but after seeing the colors and angular structure of the rock location against the tablets I think I changed my opinion. The rock location adds even more depth. Did you have any problems with auto focus with your Cannon setup for video or did you use manual focus? Like you I rarely use the video in my system and I think that that is probably a mistake. I just never think about using it since I am not and never have been a videographer. In fact, I think the last time I used it was when I filmed Simon and Roy on top of your roof fixing the chimney several years ago.

Anyway, I am blown away at your project and all the neat things you got to do. Hope you get some more.